For an emerging start-up, healthcare is an enormously complicated landscape to navigate. Start-ups as a whole must contend with concerns surrounding funding, establishing viable markets and creating suitable products, and often despite the effort and funding that goes into many of these budding companies, most start-ups, in fact, up to 70%, fail in their first five years. On top of these traditional concerns, healthcare companies must contend with many regulatory hurdles when compared to other industries, competing with pre-existing products and an even more complex valuation process which regularly sees share prices soar or plummet, often in a very short span of time. ADIL Pharmaceuticals serves as an example of the rollercoaster awaiting healthcare product development. Proceeding on to stage 3 drug trials for a treatment to address alcohol addiction, their trials showed favourable outcomes when compared to a placebo control group, seemingly indicative of a viable product. Despite this, their share price fell 20% following the release of the results in July 2022.

Almost two decades earlier, in 2003, Elizabeth Holmes stepped into this viciously competitive space, establishing Theranos to develop a new method of blood testing. Wishing to capture a market of individuals frightened by traditional blood testing methods, Holmes initially envisaged an arm patch device that could collect blood samples and instantly administer appropriate medication. Quickly ruled out as science fiction, Theranos eventually settled on 2 products; Edison, a product which could replicate the actions of a testing scientist away from a pathology centre, and later in 2016 Minilab, a miniaturized set of laboratory equipment. Following a secretive development process, Theranos’ products were marketed as revolutionary. 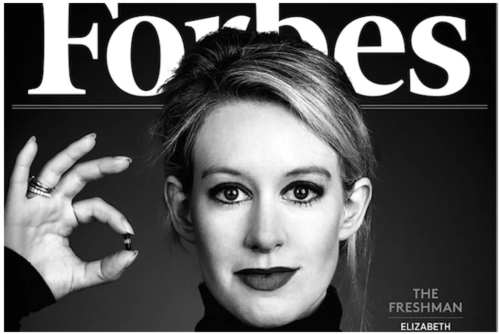 Theranos launched Edison in Theranos clinics in 2014 in partnership with Walgreens, hosting a small clinic using, apparently, solely Theranos-produced products. Over this time Theranos had raised $400 million in funding, received a valuation of $1 billion, and had partner organisations spend hundreds of millions in anticipation of building more Theranos-run clinics. A 2015 New York Times article shattered optimistic expectations, revealing that the vast majority of blood tests were being done by pre-existing blood testing products already on the market. Where Theranos products were being utilised, the results were inaccurate. Theranos was forced to void 2 years’ worth of testing, a consequence of having to use much smaller blood samples to maintain their original promise. The company itself would be sued by several of its investors, with Holmes and her confidants facing criminal trials surrounding their conduct.

The Charges Against Holmes

The trial had seen significant evidence of a multitude of lies that Holmes personally presented to investors. One of the cases that prosecutors highlighted during the trial was Holmes’ personal manipulation of a validation report of the company’s technology that was given to potential investors. She added the logos of pharmaceutical companies such as Pfizer – none of which took any part in writing the report or had seen the report – which implied to investors that these companies validated the report’s findings and approved the technology. Other examples, cited by the US Securities and Exchange Commission (SEC) in an earlier filing, included claims to investors that the company was generating over $100 million in revenue and that the US military was using its technology on the battlefield – in fact, the company had only brought in $100,000 in revenue that year, and the military never deployed its technology. Faked demonstrations and reports were also part of its pitch to investors.

But very few investors made any attempt to verify the company’s claims. Examples abound of heavyweight investors who failed to consult any experts in the field or contact any executives from Walgreens (which Theranos had a partnership with). One investor requested audited financial statements, never received any, yet invested $6 million anyway. While each person will have slightly varied explanations for this bizarre lack of due diligence, it ultimately comes down to the Silicon Valley investment landscape, where investors are often swept up in the hype and are competing to pour money into start-ups, rather than the start-ups competing for investors. Some describe a culture of looking the other way between the entrepreneurs, investors (often venture capitalists), and tech reporters, all of whom have much to gain by not digging too deep – entrepreneurs gain funding, tech reporters gain access which helps them write articles that generate more views, and the investors are just dropping money into a large number of start-ups in hopes of one of them making it big.

Theranos also had some unique factors which helped, of course. Firstly, it had a compelling story, being founded by a female college dropout in a male-dominated start-up space, and it had a bold vision to “change the world” by addressing real issues with blood testing and diagnosis. Perhaps more importantly, Holmes was a masterful storyteller who sold herself and the company perfectly. It was through this ability that she assembled her Board, another important factor in the rise of Theranos, starting with former Secretary of State George Schultz, whom she secured an introduction to in 2011 and managed to convince to join the Board. From there on, Schultz recruited multiple prominent politicians, diplomats and defense officials to the Board. This gave Holmes a twofold advantage – their names lent credibility to her company and persuaded other investors to jump in, but none of them could effectively scrutinize the company as they had no background in medicine or biotechnology, and Holmes was able to command their attention. The final piece of the puzzle was that Theranos operated in “stealth mode” from its founding in 2004 until its announcement of a partnership with Walgreens in 2013 – there was hardly any information publicly available, and it refused to speak or let anyone associated with it speak, to the media. When it finally emerged, it made sure to do it with a splash – over the next two years, Holmes appeared in profiles and covers of major national magazines and newspapers.

Although the scale of Theranos’ fraud is atypical, the behavioural driving force that was behind it is not. Startups often embody a “fake-it-till-you-make-it” hustle culture, even to the extent of venerating it. Historically, scandals and lawsuits are not foreign in the realm of startups, where venture capitalists often encourage founders to think outside the box. In fact, the whole ecosystem is based on alluring investors with big ideas that can supposedly revolutionize the market, with the mindset that the technology will come with the right concept and the right people. So what makes Theranos’ case different and deserving of criminal punishment if it was merely following the ethos cultivated by startup culture?

Theranos is not only an outlier due to its scale – being the biggest startup fraud ever committed – but also due to the nature of its scandal. Unlike all other cases of malfeasance, which mostly revolved around white-collar financial fraud, Theranos specifically dwelled on the medical space, putting thousands of people’s health at risk by allowing life-changing medical decisions to be made on the basis of their fraudulent technology. In the healthcare space, it is common for medical professionals to be sued or prosecuted for medical negligence, even without the intention to do so. In Theranos’ case, many witnesses have testified that Holmes knew of her inaccurate technology but proceeded to sell it. Hence, she could have potentially been prosecuted for knowingly endangering patients, considering the significant effect a minor discrepancy in test results can have in a patient’s medical decision-making process.

Specific examples of how Theranos tests directly affected patients include when it falsely reported a patient as pregnant when she was actually suffering from a fatal ectopic pregnancy; when it falsely diagnosed a patient with HIV; and when a patient was told she was undergoing a miscarriage when her fetus was perfectly fine. In total, Theranos retracted around 1 million erroneous blood results, where each one had the potential to endanger the patient’s life. Hence, sentencing is therefore not only well-deserved but also serves as a warning for startups looking to follow the same unethical yet ambitious path, highlighting the danger wrongdoings linked to health can have on the public.

In the age of unicorns, the Theranos case is a cautionary tale that should ideally act as a wake-up call for start-ups to hit the brakes with their “fake-it-till-you-make-it” and “fail fast, fail early and fail often” bravado. As tech venture capitalist Roger McNamee summarizes it, “Theranos was an early warning of a cultural shift in Silicon Valley that has allowed promoters and scoundrels to prosper.” Yet, with the frequency of scandals and the endemic culture of secrets and lies that plague Silicon Valley, the reality of this seems unlikely, begging the question whether a systemic change is needed within the startup ecosystem.

As a first year Bachelor of Commerce student hoping to major in Economics and Finance, I’m mostly interested in Development Economics and Macroeconomic Policy. I particularly love to explore topics and issues that revolve around poverty and inequality.

I am a second year Bachelor of Arts student majoring in English and Economics. When I’m not deep diving into the structure of the education sector or the way the share market works, you’re likely to find me on top of a mountain peak somewhere else in Victoria.

I am a second year Bachelor of Commerce student, majoring in Economics and Finance. I am most interested in public policy, global trade, and the domestic and international politics that shape these areas. Hailing from the exotic locale of Brisbane, Melbourne has grown on me but the weather leaves a lot to be desired.