Nestled in the southern regions of Asia, Sri Lanka is an island nation prosperous in scenic beauty and wildlife. However, despite its abundant natural resources and its people’s friendly demeanour, over the past few months the country has witnessed an economic crisis so severe that it is “driving millions of people into poverty, jeopardising their rights to health, education, and an adequate standard of living.” 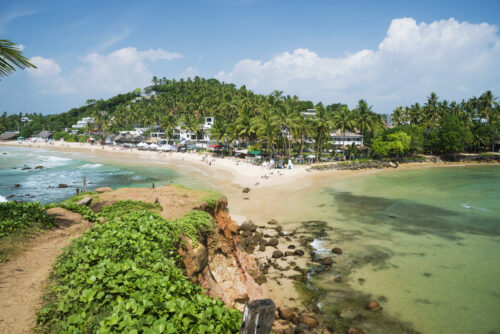 Sri Lanka’s economy had been on what seemed an unstoppable upward trajectory. The lower middle-income South Asian island economy has a dense population of more than 23 million people, greater than that of Australia, in just 0.84% of the land mass. Gross domestic product has been continuously increasing year-over-year for decades, and sat at $84.52bn as of 2021. Poverty had fallen to just 0.9% in 2016, down from 8.8% in 2002 and unemployment had more than halved in the ten years after 2002. By 2020 everyone in the nation has access to electricity, compared to just  63.2% in 2001. Life expectancy was up 5 years over the same time period. Their economic successes and societal developments over the past four decades have been nothing shy of extraordinary. Sri Lanka has developed at a rapid pace, far ahead of the likes of India, which recently overthrew the UK as the 5th-largest global economy. And yet, in recent months the country has been experiencing extremely tumultuous times.

Satisfaction rate with the economy sat at a dauntingly low level of just 2% and the government approval rate was just 3%, whilst economic confidence was a mere -96. Following months of peaceful anti-government protests, on July 9th, 2022 dissidents stormed Sri Lanka’s President’s residence in Columbo in a scene eerily reminiscent of the January 6th capitol riots in the US. They forced entry into the Prime Minister’s office on July 13th.  Calls for a prime ministerial and presidential resignations became solely a call for change in government following the ‘spectacular cowardice’ of then-president Gotabaya Rajapaksa who fled the country in the midst of the riots, leaving Prime Minister Ranil Wickremesinghe to piece the country back together. 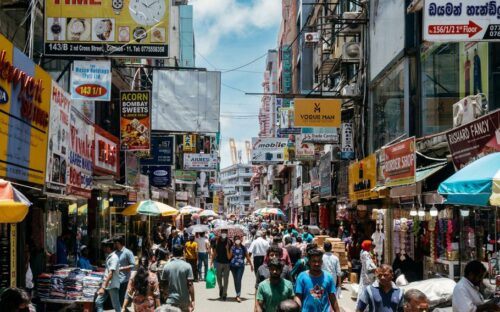 The Bustling Streets of Sri Lanka.
Source: Stars and Stripes.

Observing the current economic conditions in Sri Lanka, ‘chaotic’ is a word that comes to mind. As of July 2022, inflation had reached a whopping 54.6%, with foreign debt at $51 billion and foreign currency reserves as low as $50 million. Given the severity of the circumstances, UN Human Rights experts stated that “Sri Lanka’s economic collapse needs immediate global attention, not just from humanitarian agencies, but from international financial institutions, private lenders and other countries who must come to the country’s aid”. So, how did the situation become so dire?

Since gaining its independence from the British in 1948, Sri Lanka’s economy has been heavily reliant on the export of crops like tea, coffee and rubber, that colonial rulers had prioritised producing within the nation. As the decades progressed, the tourism and garments manufacturing industries, among others, also became major exports that were relied on. Whilst the nation diversified its export trade, it also increasingly prioritised imports to provide goods to local consumers, further ramping up these activities since the conclusion of its civil war in 2009, resulting in a major trade deficit, with imports constituting 25.3% of Sri Lanka’s GDP and exports just 17.74% in 2022, a difference of around $3 billion. In an attempt to remedy its balance of payments deficits, Sri Lanka obtained 16 loans from the International Monetary Fund, which included clauses requiring the country to cut back fiscal spending, hindering Sri Lanka’s ability to respond effectively during recessions and stimulate the economy, while continuing to take on more and more debt to keep the economy functional in the short run. With this background, it becomes clear that the Sri Lankan economy had become extremely fragile and was a power keg waiting to explode.

And explode it did.

The tragic series of terrorist attacks in Easter of 2019, targeting a number of churches and luxury hotels across the country, tarnished Sri Lanka’s reputation as a safe tourist hotspot, leading to tourism falling by as much as 80%. The effects on the tourism industry were further intensified by the COVID-19 pandemic in 2020, essentially killing the industry entirely and putting many local industries on halt. Realising the severity of the foreign reserves shortages, the Rajapaksa government responded by banning imports of chemical fertilisers in 2021, a disastrous move that would decimate Sri Lanka’s agricultural harvests and make it reliant on imports of food. This has led to food inflation as high as 90%, and almost 6.3 million people in Sri Lanka being ‘food insecure’, or unable to access a nutritious diet on a regular basis. Sri Lanka is now seeking further loans and financial assistance from the IMF and other groups as well as requesting that Russia and Qatar supply oil at lower prices to ease petrol shortages. 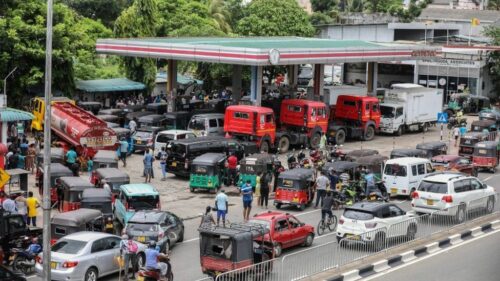 Massive Lines Outside of Petrol Stations due to the On-Going Fuel Shortage. Source: BBC.

The chaotic economic crisis could not have reached such alarming prominence if not for decades’ worth of underlying political tensions and poor government decisions.

The events that led to the first presidential resignation in Sri Lankan history trace back to the mismanagement stemming from actions of the former President Gotabaya Rajapaksa and his brother, former President and Prime Minister Mahinda Rajapaksa. Following the end of the devastating civil war in 2009, then President Mahinda Rajapaksa entrenched the nation in staggering debt by taking out massive loans, mainly to fund large infrastructure projects and appeal to the tourism industry. From there, the vicious cycle of debt grappled the nation, as the Chinese government handed out large-scale concessionary loans in exchange for strategic ties, and later did not tolerate loan deferment when Sri Lanka was hit by crisis.

The situation tracing to 2009 was further exacerbated in 2019 when the government reduced taxes exponentially in an attempt to win majority votes. The Sri Lanka Podujana Peramuna party also employed tactics of campaigning on Sinhalese nationalism and populism, ultimately allowing them to obtain the supermajority of parliamentary votes in the 2019 election. This was concerning as it signalled that an intensely elitist and militaristic government was emerging in Sri Lanka; a government that has so far depicted its allegiance to the stereotypes of a post-colonial developing nation with the use of religion and rampant nationalism to win votes and preserve the private profit of high-ranking politicians. 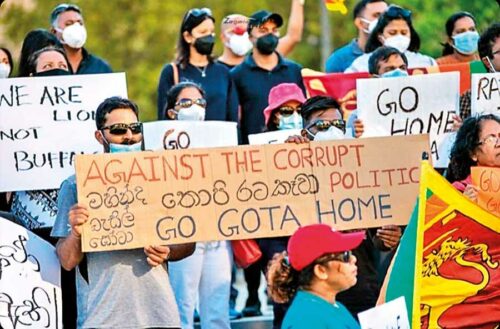 This brings us to the the severe levels of corruption and nepotism, another reason why the Sri Lankan economy has been crippled. When Gotabaya Rajapaksa was elected president, his parliament did not focus on solving the economic landmine that had opened following the tragedy of the Easter Sunday attacks, nor did they successfully navigate the chaos of the Covid-19 pandemic. Instead,they passed the 20th Amendment to the Sri Lankan Constitution, which undermined investigative powers of constitutions on the basis that the president required more authoritative power for decisions.They lowered taxes for the wealthy, elevated military leaders to high positions with links tying to nepotism, suffered serious human rights violation accusations stemming from civil war times, and used the unsustainable concept of a self-sufficient nation that nearly destroyed the import and agricultural industries.

In response to these mistakes, the majority of citizens, namely those in the lower and middle socioeconomic classes, were plunged into a situation rife with food shortages, power cuts and uncertainty. Pushed to the brink, riots and protests exploded nationwide, creating the movement that eventually led to the presidential resignation of Gotabaya Rajapaksa. Some of these protests that continue to take place are led by socialist student groups.  Many protesters, however, are average Sri Lankans, of every ethnicity, all driven to take matters into their own hands by the failure of their government. So, where does this leave Sri Lanka and its citizens?

Sri Lanka has a long road to recovery.  Government will need to rebuild trust and the nation’s economic health has to be restored.  Getting the economy back into shape for the long term will require increased foreign direct investment and humanitarian support in conjunction with austerity measures required by the government to rebalance public debt and mitigate default risk. It is essential for the government to be a pillar to its citizens. It needs to recognise its shortfalls and rebuild around core issues, such as tackling corruption and nepotism. In the meantime, it falls to the current government to address the most pressing economic concerns, such as the risk of hyperinflation, not helped by the surge in international fuel prices, which accounts for the majority of Sri Lanka’s imports.

Sri Lanka serves as an example of the dangers of rapidly transforming and inflating a vulnerable and developing economy. Without strong institutions and political checks and balances, the big risk is overstimulation, which comes at the cost of intensifying political and economic instability at both the macro- and micro-level. Delivering economic prosperity and solidarity for all sectors of society therefore requires the mediation of competing interests during times of growth, towards the aim of an equitable and just society.

I'm a Bachelor of Commerce student majoring in Economics and Management. My key interests are macroeconomics, politics and technology. As an editor at Cainz, I hope to produce insightful, meticulously researched articles on a wide range of topics.

Governments Tested in the Face of Covid-19 Pandemic

Social Distancing: Not an option to all

Is this the end to retail as we know it?

What will Virgin look like heading into the future?

Delving into the debts of the coronavirus pandemic

How to encourage global climate action

ESSA X Cainz DEBATE: “Has Abenomics been successful in Japan?”

The Belt and Road Part 2: The International Stage

I am a third year MA Economics with Finance (Hons) student on exchange from the University of Edinburgh, UK. My topics of interest include development economics - specifically, looking at the economics of Africa’s agrarian societies and global education along with international incentive systems) as well as private equity, IPOs and their impact on financial markets.

Hello! I’m a second year Bachelor of Commerce student majoring in economics and finance. At Cainz, I aim to link my writing skills with my interest in the business world to create deeply informative and interesting articles with my team.