It is to no one’s surprise that a nation as athletic as Australia, is as passionate when it comes to watching and cheering for their favorite teams. Given the nation’s success in sports at the global stage and the world-class tournaments that take place within the country, it is easy to understand why Australians have embraced a wide array of sports. As one of the biggest industries in Australia, employing more than 128,000 people, sports clubs and organizations had made a total of $14.3 billion from their operations and an additional $3.6 billion was generated from media activities like broadcasts, sponsorships, and advertisements.

The list of some of the most spectated sports consists of basketball, cricket, soccer, rugby, tennis, and the nation’s favorite Australian football. While most of those games are known and popular all around the globe, footy is a remarkable creation unique to Australia. Created in the late 19th century, it began its life in Melbourne, and quickly grew in popularity, becoming the number one sport in the region. As of today, there are 1,400,000 players (professional and amateur) in more than 25,000 clubs, all controlled and governed by the Australian Football League Commission. And like any popular sport, it has a premier professional league, namely the AFL.

With 125 years of history behind its back, the league has achieved its peak in 2021 during the lockdown, when 1.1 million people signed up to become members of their favorite clubs. This article will explore how the league generates its revenue and the manner in which players are compensated.

During the 2021 season, AFL accumulated $738.1 million worth of income from a plethora of revenue drivers such as broadcasting rights, ticketing and other commercial returns. Some of the key costs incurred by the organization as a whole relate to distributing revenue between the 18 clubs, money invested into community sporting engagement, salaries to its staff and executives and within the 2021 year specifically, travel and Covid-related expenses.

The majority of this money is spent on funding towards different football clubs across all of Australia. Traditionally, over the last decade or so, newer clubs or teams that have been struggling were provided with higher amounts of distributions by the AFL, mainly from the pool of broadcasting revenue. For example, in 2021 the Gold Coast Suns were given the highest amount of AFL funding with around $25.4 million followed by GWS($22.7 million) and Brisbane($20.7 million). 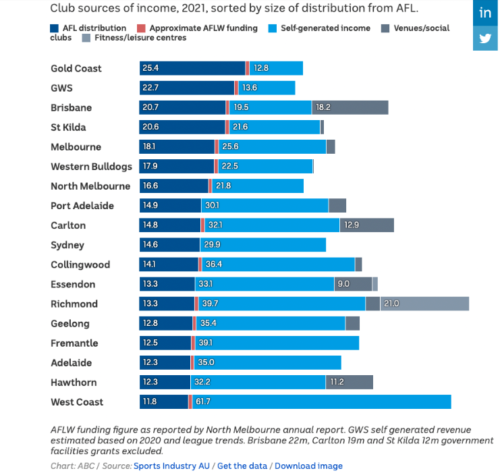 However, at an individual club level,  there remains a disparity between the amount of revenue generated by each club. Ticketing is one of the major revenue drivers for individual clubs alongside selling merchandise, securing memberships and onboarding sponsorships. A key reason for the disparity can be attributed to the amount of “marquee fixtures” teams get to participate in. Major Friday and Saturday night fixtures rake in on average 25% more ticketing revenue for clubs with this impact being more pronounced within Victoria. 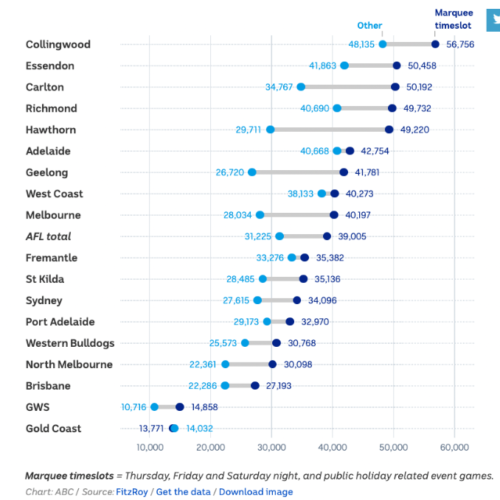 Non-Victorian clubs such as the West Coast Eagles, Fremantle and the Sydney Swans have much higher levels of patron retention at home games which are regularly not even played as marquee fixtures due to a loyal supporter base, scarcity of games and a more family friendly schedule. They also have relatively high levels of revenue generation. For example, the West Coast Eagles generate the most revenue out of any AFL club with approximately $61.7 million. This is due to a large amount of funds and grants received from mining and utilities-oriented firms.

Club memberships are also another major manner in which revenue is generated. Teams with large support bases such as Richmond and Collingwood tend to benefit most from membership schemes due to larger volumes, incentivizing the AFL to pencil in more marquee games for such clubs. It can potentially take generations for clubs to shift supporter bases; as a 2013 Geelong report to the AFL wrote “over half of supporters follow their parent’s team.” 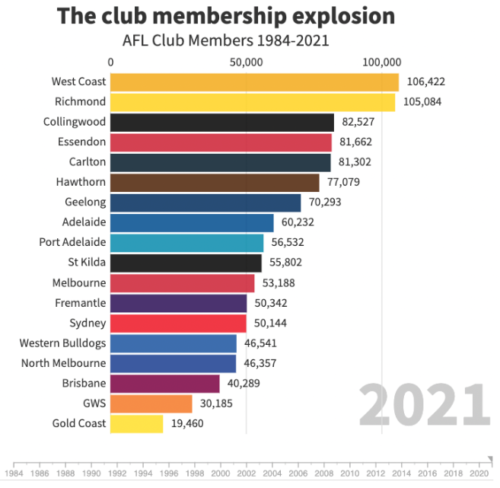 In terms of compensation, the players receive salaries through the AFL player’s organization which works hand in hand with the AFL and all clubs to negotiate player benefits. Out of total AFL revenue, players tend to receive around 28% of funds as wages and in terms of club revenue, around 11.2% is paid out as salaries. Individual player salaries are capped at approximately $1.3 million with only three players having packages larger than $1.2 million (Dustin Martin – Richmond, Lance Franklin – Sydney Swans and Jeremy McGovern – West Coast Eagles). The contracts provided by clubs to players depend on many variables such as form, age, skillset, how ‘tight’ the existing player list is and, of course, the revenue generated by the respective club. The average player salary in 2022 is estimated to be around $370,000. 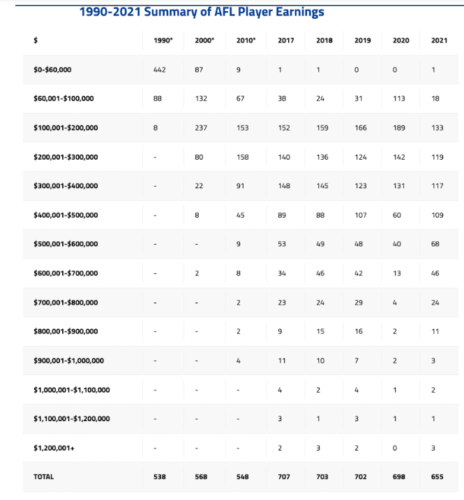 Besides traditional revenue streams, the AFL has capitalized on other existing technologies and plans to branch out to more innovative sources of funding in the foreseeable future. AFL, similar to the NBA, has recently created a deal with Australian-based Web3 advisory company Be Media to create a non-fungible token (NFT) marketplace, AFL Mint, which will officially be launched in 2023. In mid-August, the AFL released its first NFT collection which included 3,800 collectible card packs with photos of AFL captains such as Joel Selwood and Max Gawn and featured significant video and audio highlights from the 2021 season. The league plans to expand on this idea as it is currently working with digital technologies in the Metaverse to allow fans to buy tickets and meet star players virtually.

The AFL has also followed the likes of other popular sports such as Formula 1, to make use of streaming services to unite its fanbase and promote the sport. In March 2021, AFL released a documentary series, ‘Making its Mark’, on Amazon Prime Video, which featured players and executives from 6 different teams during the struggles of the 2020 season. This provided fans with an exclusive insight into the lives of famous players through a snapshot of different locations including each club’s boardrooms and training sessions. The AFL has also worked with other streaming services including Stan to produce content and promote the sport locally, releasing the documentary ‘Show Me The Money’ earlier this year.

Overall, it is no surprise that sport plays a huge role in Australian culture, as sports bring families together every year through holidays such as Grand Final Friday and the Melbourne Cup. According to UNSW Business School’s Time Harcourt, the AFL season adds around $700 million worth of economic benefit to host cities every year with around $340 million benefiting Melbourne. AFL grand final itself provides around $50 million worth of economic activity, with even more estimated if it involves a non-Victoria based team as supporters usually flock to the MCG in large numbers.

With such a wide fanbase, the nature of AFL has constantly changed over the past few years, as it mainly receives revenue from ticketing and club memberships, but is also looking at future sources of advertising such as NFTs and streaming services.

I am a first year Bachelor of Commerce student with a passion for economic policy, movements in financial markets and how politics and its underlying psychology affects decision making on a global and domestic scale. I enjoy researching such topics and synthesising them into articles that are both informative and intriguing with the help of my peers and colleagues.

I am a first-year Bachelor of Commerce student who is interested in Macroeconomics, Finance and Policy. I enjoy working with like-minded peers to produce informative and thought-provoking articles relating to economics and finance.