The COVID pandemic arguably brought economic ramifications embodied by properties unlike any recession experienced in recorded history. Whilst the initial impact in 2020 was short in comparison to the onsets of recessions, it was also unusually severe as noted by the New York Times. There are rational notions that argue the extremely high uncertainty surrounding the pandemic’s progression and the subsequent impact it would have on the global economy contributed to its unusual nature.

The data clearly characterises a sudden impact and a subsequent recovery of the recession in terms of both labour and GDP growth statistics. However, the COVID recession was heterogeneous in terms of its impacts across industries. Whilst some sectors of the economy were quick to bloom in a post-lockdown world, several industries such as healthcare, trade and ICT are still facing major staff shortages. At an aggregate level, Australia is facing a record high number of job vacancies, with a quarter of businesses reporting vacancies, a combined result of the increased demand for labour and supply shortages.

A Situational Review of the Australian Labour Market

For those who do not come from an Economics background, we have defined some key terms as a refresher. According to the RBA, the unemployment rate is the percentage of people in the labour force that are unemployed (actively looking for work). The Labour Force consists of people in paid work or actively looking for work. Thus, students, retirees, carers, or those permanently unable to work are not included in the labour force.

While the unemployment rate has been at an all-time low, job vacancies have been at an all-time high. According to the Australian Bureau of Statistics, the level of job vacancies in May 2022 was 111.1% higher than in February 2020, just prior to the beginning of the pandemic. Seasonally adjusted estimates for May 2022 present total job vacancies of 480,100, an increase of 13.8% from February 2022. The private sector saw a larger increase in job vacancies as compared to the public sector (an increase of 14.2% from February 2022 in the private sector, compared to a 9.4% increase in the public sector). Furthermore, 9.5% of employed people changed jobs in the past year, the highest annual job mobility rate since 2012.

The nature of these shortages varies from industry to industry, with some facing supply shortages due to the migration freeze and others facing a more structural shortage of skills. According to the 2016 census, the jobs most reliant on migrants were hospitality (18.3%); food trades (20.4%); and cleaning (19.3%). By May 2021, the vacancy rates for these particular sectors were almost double their rates in 2019. This dichotomy in the underlying causes of the shortages transforms this critical issue into one demanding a complex, multi-pronged solution by policymakers. 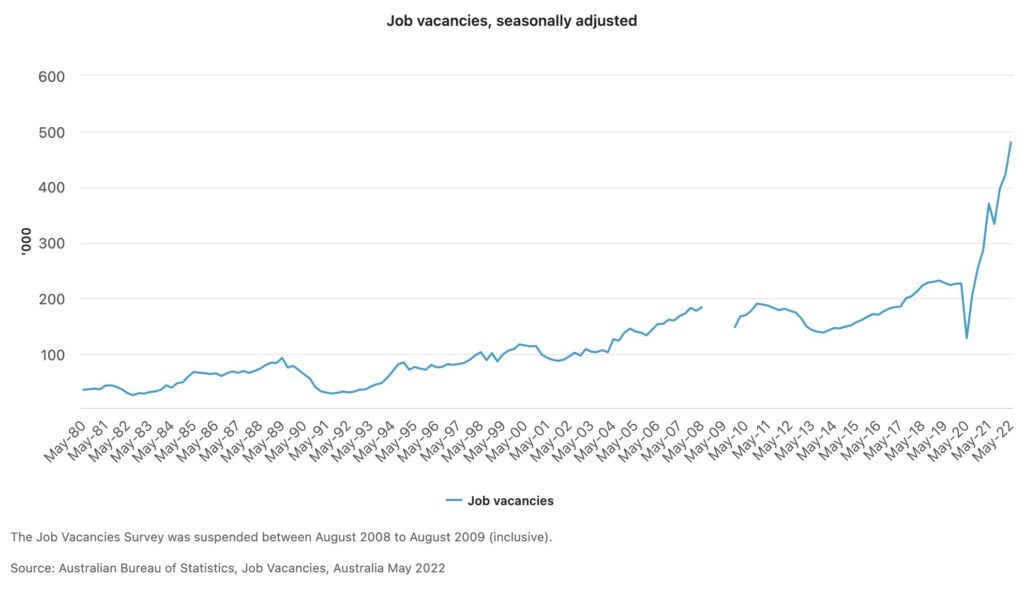 The policies proposed and implemented in response to the current labour shortages can generally be grouped into two categories – welcoming more temporary and permanent migrant workers and strengthening the domestic labour force through vocational training.

As different sectors demand workers with varied skill levels, migration policies need to be tailored to their specific needs. For example, sectors including education, health, IT, mining services and financial services are impacted due to the lack of skilled migrants. This is responded to, by the proposal to increase the permanent migration cap from 160,000 to 200,000 a year, supported by both unions and businesses and will be further discussed in the upcoming Jobs and Skills Summit on the 1st and 2nd of September. With more migration opportunities available, the visa application process would also need to be made more efficient to manage the high volume of demand and prevent qualified workers from being discouraged from applying.

On the other hand, sectors including retail, hospitality and accommodation are struggling due to the loss of 500,000 temporary migrants during the pandemic, who were mainly international students and working holiday-makers. Measures targeting these visa holders have been implemented, which include refunding visa application fees and relaxing the working hours cap of 40 hours a fortnight for international students. However, exploitation and wage theft of temporary visa holders remain prevalent, with 25% of them being paid less than half of the minimum casual hourly wage. As backpackers and students return to Australia in increasing numbers, policies against exploitative treatment and a better reporting system need to be put in place to protect the rights of these workers.

Even though migration policies provide a quick fix for existing skill shortages, it is easy to neglect the importance of investing in education and training of local workers, which is crucial for the labour supply to be sustainable in the long run. The two-year border closure’s significant impact on the labour market has revealed the lack of domestic vocational training to meet vacancies in Australia. At the Jobs and Skills Summit, the Australian Workers’ Union plans to propose that a business must train one local worker for every migrant worker employed, which seeks to find the balance between the country’s reliance on migration and the development of domestic skills. In order to encourage training participation, vocational education courses can also provide income-contingent loans similar to universities to make courses more accessible and support students from facing financial hardships.

Investing in education not only helps to prepare the economy for future industry growth but can also serve as a solution to current skill shortages in the market as well. One example is to offer micro-credentials recognised by the Australian VET system that target specific skill gaps in the labour market. These courses can be provided by industries, as well as vocational education and university providers. With shorter term programs, workers can be prepared for currently in-demand jobs with less time invested, and increased flexibility in the training process allows the domestic labour force to quickly adapt to emerging opportunities and rapid changes in the job market.

Despite the labour market largely showing signs of a recovering economy with labour demand at immense levels, there are certain submarkets that are in dire need of proactive policymaking to bolster supply. The current labour market tightness Australia is facing is an imperative issue that needs to be addressed by policymakers and the issue strongly calls for the promotion of an influx of immigration to Australia.

I am currently undertaking study in Mathematics and Economics. I am passionate about public policy, and specifically, education policy. As a writer for Cainz digest, I hope to produce informative and thought provoking articles for a diverse readership.