A Fallen Empire: Lessons from Rome for the Modern Citizen

When one hears of Ancient Rome, one might picture an almost fantastical world, with toga-clad senators, legionaries in glistening armour, and crowds roaring for blood in the gladiatorial arena. As culturally and historically distant as it may seem, Rome has had a profound impact on many aspects of western civilisation. In addition to the countless influences on politics, law and other segments of government, Roman symbolism is still displayed in the ‘fascia’ (axe with a bundle of rods as a symbol of civic authority) seen in the US house of representatives today. 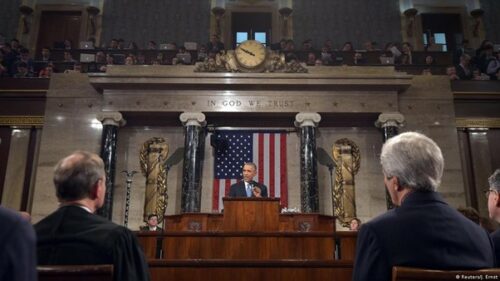 With issues like economic inequality, multiculturalism, tax reform and authoritarianism dominating the cultural zeitgeist, we may share more similarities with the Ancient Romans than many today might think. In the words of Winston Churchill, “those that fail to learn from history are condemned to repeat it”, so on that note, this article will explore the lessons a modern citizen can learn from the rise and fall of Rome and what they mean for our future.

Perhaps one of the most divisive issues of the last decade is immigration and the question of whether multiculturalism must be embraced or shunned. While far-right extremists have always existed, populist candidates like France’s Marine Le Pen and the USA’s Donald Trump have pushed xenophobic policies into the Overton window. Le Pen’s “detoxification strategy” involved cutting ties to the more extreme parts of her party while maintaining policies like a moratorium on immigration and repealing laws that would allow illegal immigrants to work towards gaining citizenship recognition. While she was unsuccessful in her presidential campaign, her ideology continues to influence and inspire white nationalist groups worldwide.

White nationalism has gone through many forms, yet at its core, rests the belief that other cultures are detrimental to society and a united white race; excluding other ethnic groups is the best way to ensure a nation’s success. To some in this group, the Roman Empire is seen as the very epitome of what a united white race can accomplish. Benito Mussolini, upon his conquest of Ethiopia and Eritrea, proudly proclaimed to a crowd gathered under the Palazzo Venezia,

“Italy finally has its empire. It is a fascist empire of peace, an empire of civilisation and humanity”. 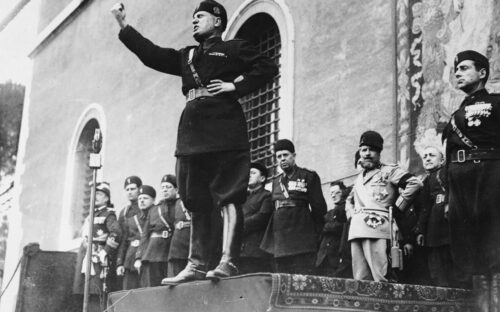 Hitler too was said to be a great admirer of Rome’s accomplishments, seeing his Third Reich as a natural successor to this era of European history. While white nationalist groups latch onto the legacy of Rome to derive a sense of identity for their cause, a greater understanding of Rome’s true policies exposes the irony of these beliefs.

To best understand the Roman mindset regarding citizenship and national identity, we can go back in time to the origin myth of Rome and compare it to some of its contemporaries. Hidden in the outlandish story of twin boys Romulus and Remus being raised by a she-wolf before establishing their city, lies a tale of welcoming and acceptance. After founding his city, Romulus welcomed all with open arms, with the founding members of Rome not being ancient aristocracy but asylum seekers and runaways. This precedent enshrined the sacred value that Roman citizenship was earned and open to all, differing greatly from many of its local contemporaries who were extremely selective about granting citizenship (and didn’t enjoy Rome’s longevity). This is not to say Rome wasn’t imperialist- a glance at a map of the empire at its peak makes that quite clear. However, the Romans always came to accept those across the empire as their own and looked to incorporate them further. This is seen in how Roman citizenship and legal protections extended to the many new regions it absorbed into its territory, to the point where it even had prominent Emperors like Septimius Severus, hailing from modern-day Libya, Diocletian from modern-day Croatia and Trajan from Spain, far from the epicentre of their civilisation.

In Rome’s prime, the army had been a vital tool for integrating new tribes into the empire. These arrangements were mutually beneficial, with Rome receiving valuable soldiers and the migrants receiving Roman citizenship and protection. When Rome did adopt a more divisive mindset in the 5th century AD, driven by corrupt and incompetent Emperors and nobles looking to consolidate power, they began implementing xenophobic policies, refusing to integrate migrant Germanic tribes into the empire. Their discriminative policies further created an instance of two social classes, with the citizens and non-citizens often working alongside each other but with one group enjoying significantly fewer rights and protections. The result? Chaos. Such injustice ignited feelings of mistrust, discontentment, and resentment among these people, who collectively played important roles in the Roman economy and armed forces. These sentiments gave rise to internal strife and rebellions, crippling Rome’s ability to withstand foreign invasions, thus leading to its eventual collapse. The idea of “illegals” working alongside citizens and contributing to society but having their efforts unrecognised and being rejected by society is a perfect description of the plight illegal immigrants face in the US. There is a lesson for modern nations to learn from this narrative, with inclusivity and unity leading to the fostering of better talent and competent leadership, and cultural division leading to violence and disorder.

Another problem that has seen a significant resurgence in the 21st century is that of economic inequality. 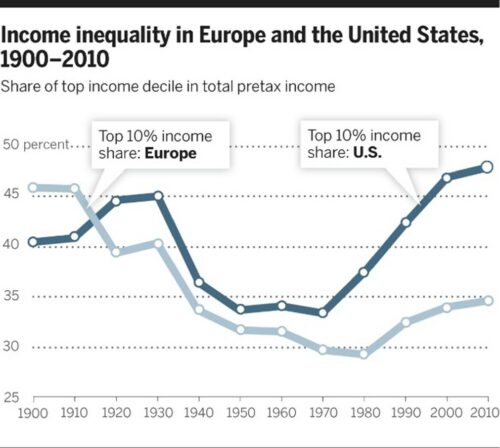 As seen in the image above, the period following the World Wars saw significant improvements in wealth division, with the top 10% income share falling to around 30% in the US and Europe, with these numbers since reaching 35% in Europe by 2010 and over 45% in the US. A significant driver of this type of inequality, especially in the US, was due to increasingly neoliberal economic policies in the 70s, in contrast to the more Keynesian policies that drove the post-war recovery period. The belief that government intervention must be minimal and exist solely to facilitate the free market is argued to be a major factor that drove the divide between the rich and the poor in America. As the divide has continued to grow, public opinion on the handling of these issues has soured, with many calling for more stringent taxation on capital and reforms to make housing accessible.

These issues are extremely like issues faced by the late Roman Republic. The Populares party in Rome ran on a platform of land reform, with charismatic politicians like the Gracchi Brothers and Julius Caesar gaining mass public approval on the ideas of land reforms to limit the hoarding of property by the extremely wealthy. The conservative elite lashed out at many of these reforms, since increasing the involvement of government to provide essential services reduced the power individual senators had to ‘generously fulfil these needs’ (in return for political favours and public favour). This draws strong parallels to the philanthropical projects of many modern billionaires like Jeff Bezos, able to devote a minuscule portion of their wealth as a means of satisfying public needs. Of course, the resistance from these groups only increased the popularity of the Populares in public opinion.

How did this situation get resolved in Rome you may wonder? Multiple public assassinations, a civil war, and the establishment of a popular authoritarian dictatorship in Augustus as Emperor. The amount of tension built up in Rome from over decades and even centuries of oppression and inequality brought politics to a boiling point, with civil debate turning into violent altercations between the parties. It may be easy to scoff at the idea of this level of civil breakdown in the West due to inequality, but is it really that difficult to picture? 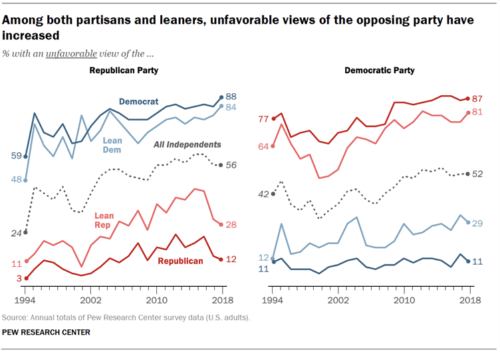 Looking again to the US, the figure above from Pew Research shows how partisanship is on the rise in US politics with Americans increasingly divided among party lines, leading to echo chambers of opinion. More food for thought, when the Roman Republic was at its breaking point, the top 1% controlled 16% of the wealth, the same number in the US as of 2021 was 33%. Australia isn’t safe from this plight either, with a Credit Suisse report dated 2018 reporting that the top 1% controlled 23% of the wealth. The Roman Republic lasted decades before it imploded and eventually resolved these issues, the question lawmakers must answer if they leave wealth inequality unaddressed is, is it simply a matter of time?

Are We Doomed to Fail?

In summary, there are a few key takeaways that one can learn from the Romans by examining how they approached economic and social issues. On one hand, multiculturalism and inclusivity must be embraced. While extremist groups may try to paint an ahistorical and falsified image of Europe’s isolationist excellence, the reality was that Rome was able to outlive its many contemporaries due to its acceptance and integration of foreign cultures, contributing to its economic progress and innovation while gifting it some of its most competent leaders. Furthermore, the implosion of the Roman Republic serves as a reminder of the repercussions of letting wealth inequality run wild. Rising inequality inextricably led to rising social tensions and class warfare, leading to political extremism on levels we are starting to see today. The almost cyclical nature of history is simultaneously fascinating and horrifying and it begs the question, are we simply doomed to repeat these mistakes as our predecessors did millennia ago? The answer is that we do not have to. While this Post-War period of relative peace and immense technological progress may feel like an eternity, it is simply a blip in the grand scheme of time. Perhaps it is worth learning from the many mistakes of a civilisation that lived on for over a millennium and adopting the policies that helped overcome them.

I'm a Bachelor of Commerce student majoring in Economics and Management. My key interests are macroeconomics, politics and technology. As an editor at Cainz, I hope to produce insightful, meticulously researched articles on a wide range of topics.

Education, The Key to Indigenous Wellbeing

Cainz writers debate: That there is too much emphasis on politics in the media

Is Remote Work the Future of Business?

Ageing Population must be mitigated, not stopped: Here’s why.

Is Industrial Policy a Viable Model for Economic Development?

A Fallen Empire: Lessons from Rome for the Modern Citizen