As the Omicron variant hit China’s largest city in March, Shanghai authorities insisted that there would not be a lockdown. However, as the cases soared, the authorities changed their stance and millions of residents were placed under a strict lockdown. The city-wide lockdown that began in early April has forced the 25 million residents into the confines of their homes for over a month, with the only exceptions being those actually infected with the virus, who are being rushed off to hospitals and isolation centers. China has continued to insist on its zero covid strategy, despite the ensuing international criticism and the opposition to the lockdown, as well as its wide ranging economic and social consequences.

The lockdowns and the zero covid policy have damaged the country’s economy and led to rising unemployment rates, food shortages and a potential mental health crisis. Unemployment in China has risen to 5.8%, a peak since May 2020, coupled with the first decline in consumer spending (3.5%) since July 2020, clear indicators of the economic costs which have arisen from China’s COVID-19 management strategies. A study by a group of Chinese economists also predicts losses up to 4% of national real income stemming from a half-month lockdown in Shanghai. As such an integral financial and commercial hub, a lockdown of Shanghai has severe consequences for China’s economy as a whole.

Supply chain issues in particular, encapsulated by the 163% increase in import container wait time over almost 5 days, have manifested in food shortages throughout Shanghai with residents reportedly suffering ill health from consuming wild vegetables growing in apartment complexes. As roughly 80% of Shanghai’s food supply arrives from elsewhere in China, the impact of road closures and locked down delivery drivers on the availability of food for Shanghai residents has been extremely exacerbated.

Increasing unemployment, food shortages and harsh COVID-19 lockdown mandates have also taken a toll on psychological well-being within China, which can be contextualised through the dramatic spikes in searches for “psychological counselling” search engines have reported since March. This correlation between enduring COVID-19 lockdowns and worsening mental health outcomes is well-established, a 25% rise in anxiety and depression globally in the first year of the pandemic was cited by WHO, and represents the diversity of socio-economic challenges facing the Chinese government. Shanghai’s lockdown has highlighted the extent to which China’s socio-economic stability can be threatened by COVID-zero policies that create logistical bottle-necks and place strain on supply chains that are integral for the Chinese and global economy.

As aforementioned, the prolonged lockdowns in Shanghai could negatively affect the competitiveness of China’s export economy in the longer term, as the city contributes to roughly a third of the country’s overall GDP. Thus, the restrictions imposed on the city’s 25 million individuals has a growing potential to disrupt international supply gains. This includes everything from medicines to electric vehicles—imposing a lag on the global economic recovery despite the re-opening of nations.

Shanghai and its neighboring regions are among China’s biggest manufacturing centers. Truck drivers have been restricted from delivering goods to major shipping ports in Shanghai, which would potentially further disrupt global supply chains. Major American companies operating in China such as Apple and Tesla, have been impacted by their factories being unmanned. Emerging Asian countries such as Vietnam and Cambodia may see the biggest loss due to their dependence on Chinese inputs for manufacturing. Chinese components make up for an estimated 24% of gross value added to Vietnam’s manufacturing sector; where they also contribute to more than 20% of Japan’s total imports, and 15% of the international purchases of the United States. 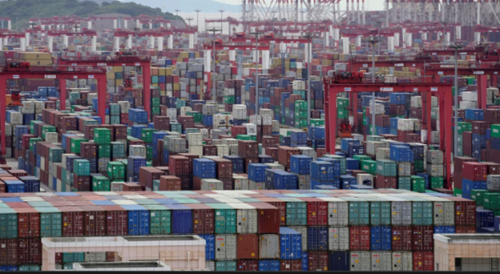 The lockdowns have led to delay in shipping, exacerbating the supply chain issues across the world. (Source- Washington Post)

Shipping delays are expected to hit Europe in roughly two months, as it takes around 5-6 weeks for cargo ships to travel from Shanghai to countries such as Germany and a further two weeks for the goods to be offloaded and delivered. With the markets already struggling with energy shortages due to the Russian invasion in Ukraine, the situation is only about to get worse: Germany has just recorded its inflation hitting nearly a 30-year with strained supply chains driving up the prices.

The breakdown of the supply chains and rising shortages will ultimately hit the everyday citizens the hardest as soaring inflation threatens post pandemic recovery across the world. Rising prices have continued to diminish the access to basic products for marginalized communities, leading to heightened food insecurity and reduced access to medicine in developing countries. The UBS Global Health Management chief investment officer has expressed his belief in the elevation of oil prices, as China struggles to minimize the economic impact of lockdowns and the global market fights to replace Russian supply. Global oil prices have decreased due to the restrictions imposed by the Chinese government. The future contract for Brent cured- an international benchmark for oil prices- was down by roughly 4% at around $115.80AUD a barrel. Therefore, the private sector, small and local business, household businesses and the migrant workforce—will dimly be among the most negatively impacted sectors of the economy.

The severe socio-economic impacts of the month-long Shanghai lockdown continues to raise many questions about the purpose of the “Zero-COVID” strategy. Food shortages and worsening mental health outcomes of many Shanghai citizens have already culminated in public protests and online dissent within China, the latter swiftly taken down of course by the country’s highly efficient censorship apparatuses. But China’s hesitancy to ditch its COVID strategy due to the large number of unvaccinated vulnerable Chinese citizens, continues to impose costs on the rest of the world, many of which will only be realised in the coming months. These events have reignited conversations about supply-chain relocation out of China, which initially arose during the Wuhan outbreak of early 2020. What remains to be seen is China’s commitment to its Zero-COVID strategy and the extent of its willingness to ignore the wellbeing of its citizens as well as its role as a major supplier to the rest of the world.

I am a Bachelor of Commerce student majoring in Finance and Economics. As a writer at Cainz, I aim to provide engaging and well-researched articles on unique topics. My main interests lie in the energy transition as well as technological developments.

I am a second-year student studying a Bachelor of Arts majoring in Criminology. I am mainly interested in writing about social and political issues; and would love to expand my knowledge in a range of other topics during my time at Cainz.

I'm a second year Bachelor of Commerce student majoring in Finance and Economics with a passion for writing and research. My key interests are primarily public policy and macroeconomics. Outside of university commitments, I enjoy playing guitar, chess and watching Formula One.