Financial markets and exchanges are a core pillar of the modern economy serving as a means for investors to trade securities, commodities, derivatives, and other financial instruments. By providing businesses with the opportunity to raise capital and manage risk, well developed  and regulated financial markets have been linked with long term economic growth (Purewal & Haini, 2022), and have the potential to increase the wealth of investors. Hence, financial markets undoubtedly hold a significant influence on present-day economies.

Financial activity dating back to the 1300s amongst investors spurred the conception of what we now know today as financial markets. The trading of financial instruments began in Venice where individuals would trade government bills/debt issues and currency (Mueller, The Venetian Money Market). Investors would congregate in common areas to transact with each other.

The first official physical stock market (known as a bourse) began in Belgium in 1531 where investors were trading commodities and debt securities since the concept of stocks had not been developed yet. In 1611 with the first joint-stock company, the Dutch-East India Company, whereupon the modern-day stock was birthed on the Amsterdam Stock Exchange. 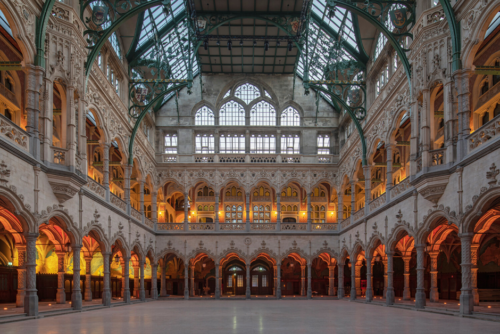 The gradual development of financial markets over the next century led to their adoption in the USA. The creation of the lesser-known Philadelphia Exchange (now owned by NASDAQ Inc)  propelled the development of the US’s financial sector. Moreover, the NYSE which overtook the Philadelphia Exchange in popularity was also founded later on off the back of the Buttonwood Agreement. Still, trading was done in person and Over-The-Counter and there were large barriers to entry in terms of cost as well as the hours the exchanges were open. This meant that there was a high concentration of wealthy people in the market.

Over decades of rapid growth in technology and computing power resulting in the commonplace adoption of computers and networks in workplaces gave rise to the creation of the NASDAQ exchange in 1971. After more years of technological development in automated trading systems, this became the first exchange to provide electronic trading as an option.

Before the total adoption of electronic trading in some exchanges, investors themselves, or brokers on behalf of the investors, met on the trading floor to execute transactions. As a method of communication, participants used both speech and gestures which were enough to be legally binding, known as open outcry. Before the ticker tape revolutionised the stock market at the time, traders would have to overcome the hurdle of slower data transmission as data was transferred via telegraph lines and on top of that, price movements needed to be graphed manually and telephones were yet to be invented. It was only in January 2007 that NYSE stocks could be trading fully electronically and without the need to pass through the trading floor, which was embraced by investors. 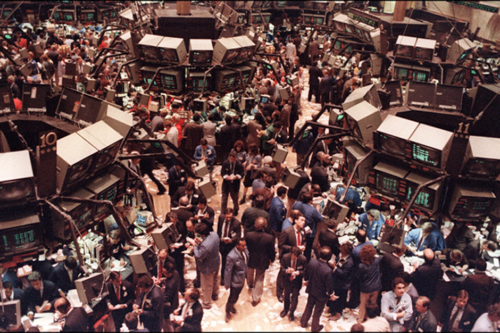 For what we are now able to do ourselves at the tap of our fingers people previously had to go through an agent, known as a stockbroker, either on phone or in person. To perform the same action, they incurred a higher cost in many ways. This highlights the inefficiency of those methods and why the development of the electronic stock market revolutionised investing for the average person.

Traditionally, the financial market has been largely dominated by institutional investors. Institutional investors, primarily represented by large banks, pension funds and hedge funds, naturally have a greater impact on the market due to the sheer volume of their trades. In contrast, retail investors, often composed of wage earners and characterised by passive and systematic investments, had little to no impact on the market due to their smaller market share and lack of coordinated effort.

However, in recent years, retail investing activity has seen tremendous growth over the last few years, both due to increased accessibility and reduced risks. Platforms such as Robinhood recognised the potential of the Retail Investing market that had largely been untapped in the past, and sought to capitalise on such an opportunity. Through developing applications and gamifying the investing experience, these platforms greatly improved accessibility and enjoyability of retail investing. The increased accessibility is complemented by a reduction in the traditional barriers associated with retail investing. The introduction of commission-free investing by retail brokers, and the stimulus payments from governments around the world as a response to the COVID-19 Pandemic, have provided retail investors with greater liquidity and thus lowered the barriers to entry into the market.

This surge in the number of active retail investors has shifted the market dynamics and reshaped the existing structure. Retail investors have shown time and time again that they are more than capable of disrupting the market and sending it into chaos. Notably, the GameStop trading frenzy is the most explosive and visible example of a shift in market power. The 2,000 percent increase shows that the dichotomy between retail and institutional investors in the financial market is not always a story of David versus Goliath- rather, coordinated and sustained effort by retail investors to rally a stock can have profound impacts. Similar trends have been observed in other “meme stocks” and “meme coins” in the cryptocurrency market which further display the power of retail investors. Additionally, research also suggests that greater retail trading activity can disrupt the price-earnings relation in the immediate earnings announcement window, as it is hypothesised that retail investors disregard accounting information or at least fail to fully appreciate the valuation implications of it. Overall, retails investors have greater power to disrupt financial markets, however, it is uncertain whether such a trend will continue when retail investors are better informed, and when there are stricter regulation in place to counteract the irrationality and unpredictability in retail investors’ behaviours. The revolution in how we trade stocks also transforms the makeup of the market participants. Retail trading apps like Robinhood and Etoro simplify and gamify the investment process by removing the high barrier of entry into stock trading. Further, they provide a clean user interface, encouraging more of the younger generations to get involved with the financial market.

This new wave of retail investors is redefining stock pricing. Traditionally, large institutional investors play a major role in influencing stock prices because of their large trade executions. However, as recent research from Wharton suggests, retail investors prefer an opportunistic approach to investing. They tend to overreact in the way they buy or sell stocks in response to unexpected earnings reports. These companies’ stock price continues to remain high long after the earnings announcement window, indicating how retail investors’ opportunistic trades are influencing the market pricing mechanism.

It is difficult to measure whether this trend undermines or benefits the price’s accuracy in reflecting company’s performance on paper. As we have seen previously in the case of GameStop, the deteriorating business outlook and performance were definitely not reflected in the influx of retail investors’ long positions.

A growing quantity of retail investors not only increases uncertainty in the market but also contribute to market movements that defy the conventional market wisdom that stock prices will immediately adjust after an initial reaction to the earnings announcements. In reality, it seems that sometimes the initial market reaction is incomplete, and thus we may observe stock prices to continue to climb upwards for positive events or downwards for negative events to a greater extent than is warranted.

I am a third-year Bachelor of Commerce student majoring in economics and finance and work part-time as a maths tutor. My interests include history, geopolitics, as well as both micro and macroeconomics. I hope to make substantive contributions to the publication and expand my intellectual horizons while working alongside my fellow writers.

I’m a Bachelor of Commerce student in my first year majoring in Finance and Economics. My primary interest lies in how global politics influence the financial market, including the financial derivatives sector. I aim to deliver concise, insightful, and easily digestible content to readers who don’t necessarily have any prior finance background.

I’m a Bachelor of Commerce student in my penultimate year majoring in Economics and Finance. My main interests are Microeconomics, International Economics, and Behavioural Economics. As a writer at Cainz, I strive to produce high-quality, purposeful articles on a range of topics.