In the light of recent troubling events around the globe, there has been a range of impacts on the Australian energy sector. Chief among the catalysts is a pandemic’s after-effects that have yet to ebb away completely. Due to lockdown restrictions and the resulting contraction of economic progress in 2020, several energy firms have implemented layoffs and even shut down, in extreme cases. Nonetheless, as the economy began to construct itself around more effectively and against the pandemic’s disruptions, the effects on the energy market as a whole were less adverse than expected. However, Australia is heavily dependent on imported fuel, rendering it quite vulnerable to international disturbances. Thus, as a result of the Russia-Ukraine conflict and the fluctuations in energy prices, additional effects necessitate consideration to ascertain where Australia’s energy market stands fully. Also key to the discussion is how Australia will move forward, especially in the age of climate change and renewability.

Exploring the causes of volatility in Australia’s energy sector:

Overall, COVID-19 has only acted moderately on energy market outcomes in general. For example, falling international fuel prices initially seeped into domestic markets. Also, despite the shutting down of firms, the electricity usage of residential customers increased due to COVID-19 as they spent more time at home, a case most pronounced in Victoria as the state experienced the longest lockdowns. In contrast, in terms of reducing traffic and economic activity, there has been a deterioration in energy usage. Hence, merging these two influences led to the moderation of total effects.

Another factor to examine is the energy market’s vulnerability to environmental disasters. Specifically, high demand and outages during bushfires lead to price spikes in electricity, while extreme storms in Victoria and New South Wales had skyrocketed prices when transmission towers collapsed. However, once it seemed the world was finally recovering from the effects of a debilitating pandemic and environmental disasters, the Russian-Ukraine calamity emerged to increase energy costs exponentially.

Why did the Russia-Ukraine crisis cause fuel prices to increase globally? 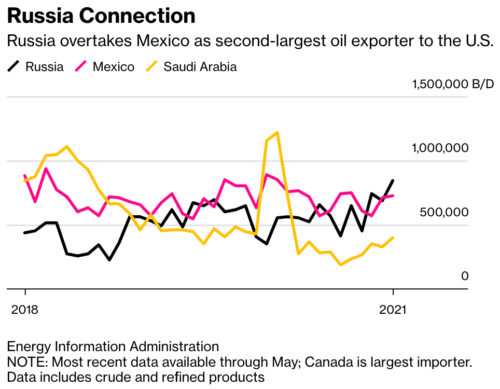 What are the impacts of the Russia-Ukraine crisis on Australia’s energy sector?

Industry observers immediately stated that Australians would not escape these repercussions and that the European crisis had led to LPG prices that were “unfathomable by historical standards”. Contrarily, an interesting phenomenon is that there would be both “winners” and “losers” from this particular price spike. Rabobank economist Eijkelenburg disclosed that winners would be the Australian energy producers who benefit from the increased commodity prices. This contrasts with the losers, which ultimately comprise consumers who are indirectly affected as the price spikes traverse down supply chains. An unfortunate fact glares out of this turn of events: before the global crisis, Australian energy prices fell, chief among them electricity. They were the cheapest they had been in a decade, mainly due to the transitioning state of the energy market. More and more renewables are coming online, and electricity is transforming from a centralized fossil fuel system into more comprehensive arrays of wind/solar generators and grid-scale batteries. This transition acted as yet another moderator for the effects of COVID-19. A recent ministerial statement from the Morrison government responded to worries surrounding the fuel spike, stating that the government was closely monitoring global energy markets and Australia has vital gas and oil supplies for domestic use and can ensure energy security.

The long term: Is Australia “fuel-secure”?

A nation is fuel-secure if it has enough liquid fuel to sustain it in a global supply shock. The Russian invasion of Ukraine has activated concerns about Australia’s fuel security. This is revealed by the energy program director at The Australia Institute, Richie Merzian, who stated Australia is “incredibly liquid fuel-insecure”, with 90% of fuel imported from overseas and just two local oil refineries. Notably Geelong’s Viva refinery and Ampol’s Lytton refinery in Brisbane. Under IEA rules, each country must hold emergency oil stocks equivalent to at least 90 days to avoid international supply shocks. In December, Australia still fell short of the requirement, with only 67 days’ worth of petrol onshore. On a positive note, the 2020-21 budget has built on the fuel security package and promises to lock in Australia’s refineries to at least 2027.

The short term: What is the fuel excise, and what happened to it in the recent 2022 budget?

For now, hope for fuel price reduction is beginning to surface. The fuel excise is the levy built into petrol prices which aid the government to fund roads and infrastructure. Until midnight on budget night, the fuel excise was 44.2 cents per litre. The government has since halved the excise to 22.1 cents per litre to help combat the spike in petrol prices. The cut is only set to last for six months (until September), after which oil prices are predicted to plateau. It is anticipated that fuel prices will begin to decrease within two weeks of the excise cut. The excise cut includes diesel and other petroleum-based fuel types, constituting pleasant news for truck drivers. However, aviation fuels have been excluded, which will continue to cause increased airfare prices. Mark McKenzie from ACAPMA, the peak body representing Australia’s service stations, is against the excise and argues that “trying to solve a global oil market problem by adjusting an in-country excise is not essentially a fix”. Ultimately, Mr McKenzie stated that everything came back to OPEC. OPEC is an intergovernmental organization whose objective is to “coordinate petroleum policies among member countries to secure fair and stable prices”. McKenzie says that “the government needs to continue to work with the 30 economies in the International Energy Agency, using strategic reserves to pressure the OPEC countries off the bench and get them to ramp up production”, given that increased oil supplies reduce the price.

Reports which have suggested that an Iran nuclear deal is back on the cards and that OPEC countries, including the United Arab Emirates and Saudi Arabia, may boost oil production have eased fears of a supply shortage and further fuel price spikes. However, OPEC’s most recent monthly report did warn that the Russia-Ukraine conflict threatens to intensify the surge in global inflation, incapacitating oil demand and investment.

Locally, the fuel excise cuts are expected to precipitate short term relief, while the treasury has forecasted that the price of a barrel of oil will come down to $100 by the end of September, the oil cost preceding the Russia-Ukraine crisis.

The graph below shows oil prices per barrel over the last three months. It should be noted that the price was approximately $100 a barrel in December before the predicament. 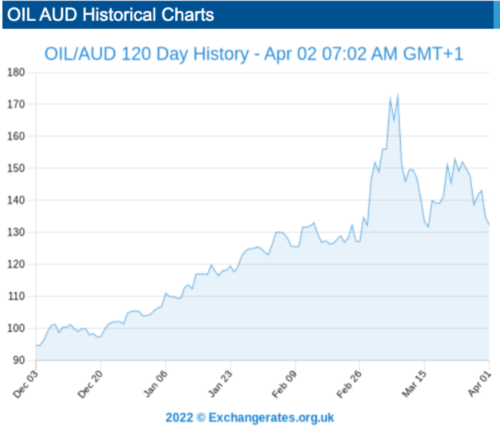 Currently, our issue stands as this; Australia can either expand their current fossil fuel infrastructure in a time when Australians support a shift towards renewable energy or begin to reduce Australia’s dependence on these commodities. Potential actions should doubtless centre on the latter, with government agencies already noting the ability of renewable sources of energy to dampen price volatility in more traditional energy sources.

One potential solution to the problem of high commodity prices passed on from fuel companies lies in electric vehicles of all types, with car-makers already planning to primarily produce electric vehicles and Victoria’s tram network already powered entirely by solar power. Assuming Australia continues its current commodity consumption in energy-making, Australia should have enough coal to last at least another 34 years. This suggests that Australia’s current electrical usage can be sustained for sufficient time to reach an alternative solution. Advances in reliability for renewable energy sources indicate the transition Australia can implement, away from fuel sources like fuel, which are predicted to discourage travel with increasing consumer prices. In time, it seems, oil availability will be rendered a minor issue by developments in how we generate electricity.

While this long view may seem set in stone, potential short-term solutions to this issue lack certainty. Shortages of materials have placed premier electric vehicles out of reach for most Australians, and experts have indicated that popular methods like cutting the fuel excise will not ease the squeeze felt by Australians. In this space, the government should encourage public transportation usage alongside existing measures such as making private electric vehicles more affordable. This can be done by establishing more effective routes and consistent timetables, as currently, very few Australians favour public transport over personal vehicles. As noted previously in this article, the fuel price increases will disproportionately affect lower-income families, correlating with how lower-income areas receive poorer public transport servicing.

In consequence, increasing the effectiveness of public transport networks could help give Australians a viable alternative to travel with costly private vehicles. Specifically, if such campaigns were influential in the long term, they would reduce public demand for fuel reserves. This represents another way to help lower prices.

Australia’s precarious energy situation has been impacted by a series of events that have affected its energy security and, as a result, prices for essentials among everyday Australians. In particular, fuel prices have spiked significantly due to multiple supply factors, with this increase threatening to spill over into various other inelastic costs. Despite multiple solutions presented, such as reducing the fuel excise or trusting the global market to make up shortfalls, more action should be taken. In particular, it would be beneficial for the Australian government to rectify inequalities within public transport to help reduce the usage of private vehicles while the electric vehicles industry matures.

I am a Third Year Commerce student majoring in Accounting and Finance. I am extremely keen to expand my knowledge beyond these disciplines at CAINZ and thus, report on contemporary issues in the current economic climate to make a contribution to society!

Hello! I’m a second year Bachelor of Commerce student majoring in economics and finance. At Cainz, I aim to link my writing skills with my interest in the business world to create deeply informative and interesting articles with my team.

I am currently undertaking study in Mathematics and Economics. I am passionate about public policy, and specifically, education policy. As a writer for Cainz digest, I hope to produce informative and thought provoking articles for a diverse readership.

I am a second year Bachelor of Arts student majoring in English and Economics. When I’m not deep diving into the structure of the education sector or the way the share market works, you’re likely to find me on top of a mountain peak somewhere else in Victoria.