The History Behind The North Atlantic Treaty Organisation and The United Nations.

The North Atlantic Treaty Organisation (NATO) and United Nations (U.N.) dichotomy has a peculiar history. Their cooperative experience has been the subject of criticism since NATO’s inception, at which point it was first linked to the U.N. First, it is important to distinguish between the two organisations and understand their differences. The United Nations (U.N.) was founded in 1945 with the following purposes: “committed to maintaining international peace and security; to develop friendly relations among nations; to achieve international co-operation; to be a centre for harmonising the actions of nations” as set out in its charter1.  In contrast to the U.N. ‘s aim to avoid war, the North Atlantic Treaty Organisation (NATO) which was formed in 1949 aims to guarantee the freedom and security of its members through political and military means2.

Although the two organisations both strive for peace, there is a stark contrast between their respective methods of achieving this goal. The U.N. has been designed to act as a peacekeeper to avoid any event of war as well as ensuring human rights for all, whilst NATO is in the business of military and political peace enforcement.

The U.N. was established in 1945 after the harrowing events of World War II. Member States of the U.N. signed a declaration issued by Franklin D. Roosevelt and Winston Churchill that vowed to create an international post-war peacekeeping organisation. Four years later, NATO was created as a military alliance by Western powers to counter Soviet and Communist powers.

Considering the significant differences between the U.N. and NATO, it is no surprise that their roles are sometimes at odds with each other. Indeed, there is a history of distrust between the two organisations. The most conflict-ridden example of this was the period between 1955 to 1991 during the formation of the Warsaw Pact by the Soviet UN as a counterbalance to NATO3. During this time, tensions were high as the two opposing military alliances, NATO and the Warsaw Pact, ignored the U.N.’s calls for disarmament. This 45-year period of animosity is the cause of much distrust towards NATO by some member states of the U.N.

On the flip side, there are also times when NATO has complemented the U.N.’s objectives. A striking example was in Bosnia-Herzegovnia when both peace and a political solution were not present, the U.N. turned to NATO for its military muscle4.

In light of their history, it’s become clear that the U.N. and NATO have established their own roles. But with the common objectives, they need to continue to work together towards a partnership for peace. 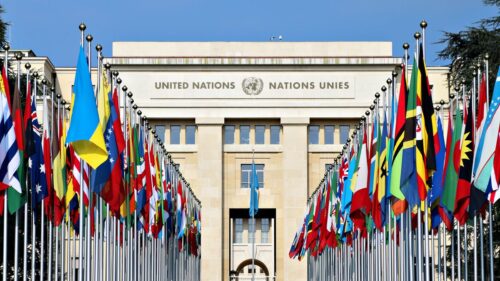 With the maintenance of international peace being the main goal of the U.N., the United Nations Security Council plays an important role in achieving this mission. The Security Council consists of 15 members, including five permanent members (P5) – China, France, Russia, the United Kingdom, and the United States5. The Security Council takes on the responsibility of determining when peacekeeping operations should be undertaken. This ranges from providing assistance with reconciliation, to implementing military interventions authorised by Chapter VII of the Charter of the United Nations, which is often carried out by NATO6. Each of the permanent members is able to ‘veto’ proposed actions, which means that a consensus among the P5 needs to be reached in order for a proposal to be passed. This requirement led to the inaction of the Security Council on conflicts in Syria and Israel in the past, as the decision making process is subject to the political interests of the P5, which often do not align with one another7. The recent inaction on the situation in Ukraine due to Russia’s use of its right to veto calls into question again the effectiveness of the Council, and raises discussion around whether a structural reformation would be necessary to ensure the core value of the United Nations is put into action.

Another important function of the U.N. is the Economic and Social Council (ECOSOC). Even though great emphasis is placed on achieving international peace, most of the United Nations’ resources go towards efforts made on economic, social and environmental sustainability11. The ECOSOC sets out sustainable development goals (SDGs) in their annual meetings to highlight their focus for the year, and are responsible for high level meetings including the U.N. Conference on Sustainable Development (Rio+20)12. It has also supported the improvement of living standards and women rights, and responses to global epidemics. This shows that despite the ability to maintain international peace is being challenged, the United Nations has made key contributions to social development and human rights. 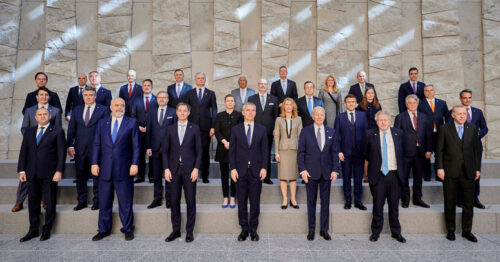 NATO, or the ‘North Atlantic Treaty Organization’ is a military and political alliance founded in 1949, with headquarters in Brussels, Belgium. The alliance has 30 members, with a vast majority of them (28) being in Western Europe or North America13. The main function of NATO is to “prevent conflict” and reach “peaceful resolutions of disputes”, especially between its member states14. Perhaps a more blunt but simple explanation of NATO is Article 5 of NATO’s principles: an attack against one of its member states is an attack on all thirty of the member states15. This is probably the strongest attraction and biggest benefit for the member states and potential prospecting states, especially smaller nations that may not have a large standing military akin to the global superpowers in this current world.

Article 5 in particular, was first enacted after the 9/11 terrorist attacks that occurred in New York City back in 2001. The terrorists themselves were thought to have pledged allegiance to Al-Qaeda, led by Osama bin Laden. This attack, along with the fact that Al-Qaeda was already listed as a threat to the United States, allowed the United States to activate Article 5, and hence the a twenty-year war on terror started. NATO assisted with numerous items, such as drone strikes upon suspected terrorist cells and scanning for any terriost financing activities (people smuggling) in the Mediterranean16. This was the first, and currently, the only time that any member state(s) of NATO have enacted Article 5, a clause originally designed to protect the Western forces during the mid 20th century against the Soviet Union during the Cold War17.

Whilst currently there is no direct rival to NATO, there was the Warsaw Pact, an alliance much similar to NATO but focused on the Eastern Bloc nations that had socialist or communist governments, founded in 195518. After the fall of the Soviet Union, many former members joined NATO, usually after the initial governments were overthrown or simply changed to a capitalist republic. Countries such as the Czech Republic, Latvia and Romania, were all once part of this pact, but joined NATO after the disbandment of the Warsaw Pact in 1991.

There are a few countries that have not joined NATO though, most specifically and most relevant to today’s news: Ukraine19. NATO can be described as the culmination of the strongest Western forces together, and hence, we can say that Article 5, amongst other elements (make-up of member states, relationship between said member states etc.) is what makes NATO one of the most – if not the most, powerful military alliance in the world at the moment20. If a nation attacked Ukraine, that would be an attack on all of NATO, essentially creating another world war. Ukraine’s efforts to join NATO in the aftermath of the Crimea annexation in 2014 is considered to be one of the main factors for the current Ukraine invasion by Russia21.

Whilst International Organisations such as NATO and the U.N. strive for peace and work to avoid conflict, there is one thing to note; so long as the dominant global powers (i.e. China, Russia and the United States of America) disagree on issues surrounding sovereignty, there will always be tension between NATO and global powers who oppose NATO. Furthermore, the severity of the Ukraine conflict and humanitarian crisis the nation is experiencing, along with the powers Russia possesses as a member of the P5, indicate issues in the structure of the U.N. Security Council, and suggests that the functionality of the U.N. as a peacekeeping international organisation may be under siege.

I'm a Bachelor of Commerce student in my final year majoring in Finance and Management. My key interests are in public policy, regulation and inequality. As a writer at Cainz, I hope to produce pertinent pieces of work that will help people think critically about the pressing issues of our time.