The Future of Brain Computing Technology.

From 2021 to 2030, the brain computing interface (BCI) industry is projected to grow by a compound annual growth rate of 13.9%, reaching a global market size of $5,463 million by 20301. Among emerging players in this competitive market, Neuralink, a neurotechnology company founded by Elon Musk, has recently attracted media attention due to allegations of animal abuse in the experimentation of their products. In order to achieve direct communication between the human brain and computers, the company’s aim is to develop a brain implant called the ‘Link’, which translates neural signals in the brain into commands for external devices to perform intended actions2. The ‘Link’ is a chip, similar in size to a coin, and is inserted into the brain by a surgical robot along with connected micron-scale threads to process and transmit signals from different areas of the brain3. This technology seeks to empower paralysis patients with independence and treat various neurological disorders4. Despite these medical intentions being advertised as the main mission on Neuralink’s official website, the owner of the company seems to have a more ambitious goal. Elon Musk stated that the BCI technology has the potential of preventing humans from being left behind by artificial intelligence5. This means that the ‘Link’ is not only expected to support paralysis patients and cure neurological disorders, but also to become a widespread product that allows non-disabled people to interact with their devices in a more efficient way.

The Ethics of Animal Testing.

Animal testing is primarily used in experiments contributing to developments in the fields of medicine, pharmaceuticals and cosmetics, and public opinion on this subject varies based on which category the purpose of animal testing falls in. According to a survey conducted in 2016, 80% of participants view animal testing for cosmetics as unacceptable, as cosmetics are not considered necessities; thus, the involvement of animals in these experiments is not viewed as justifiable by the human benefits resulting from this practice6. In line with observations made in the survey, more than 41 countries currently have laws in place to limit or ban animal testing for cosmetics, including Australia, New Zeland, and all countries in the European Union. Countries without these regulations are required to exclude animal testing in the development of their products in order to export to countries that have limited or banned this practice7. On the other hand, considering the ethical value of medical advancements, 65% of participants view animal testing for medical reasons as acceptable, and 17% of participants view it as mostly unacceptable unless no testing alternative is available6. Under the Federal Animal Welfare Act in the United States, species including mice, rats, and birds, which account for the majority of animals used in experiments, are specifically excluded from regulations in order to avoid hindering medical advancements8. This again aligns with the public opinion suggested by the survey results, displaying the possible influence of general consensus on the establishment of regulations surrounding animal testing. 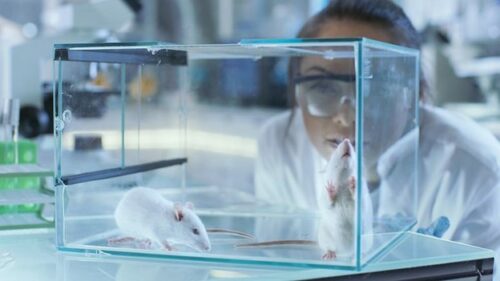 The History Behind Neuralink and Animal Abuse.

Neuralink’s experiments on animals have been on-going since 2017, a year after the company was founded. In a partnership program with the University of California, Davis (UC Davis), Neuralink has “conduct[ed] animal-based research”, focusing on the macaque monkey species and pigs9. With the nature of Neuralink’s services, many of which are invasive, animal testing was deemed necessary for Neuralink to further develop their products. In August 2020, Elon Musk shared a live demo of a Neuralink chip implanted within the brain of a pig, connecting wirelessly to a computer that showed that pig’s brain activity whilst it was sniffing around in its pen10. This itself was more of a proof-of-concept than a definitive showcase of its potential, but it was also the first time that Neuralink publicly showed off its experiments. Certain animal rights groups were immediately against this showcase or any animal testing done by Neuralink, with PETA’s president Ingrid Newkirk asking for the experiments to be done on Musk himself, rather than “exploiting smart, sensitive pigs who did not volunteer for surgery”11. In a video release from Neuralink in April 2021, a monkey is seen playing a custom version of the video game ‘Pong’, using the chip embedded in the brain to control the paddle12.

In a recent press release by the Physicians Committee for Responsible Medicine, a non-profit medical ethical watchdog, it claimed that Neuralink had “abused monkeys” throughout the four year tenure of testing at UC Davis13. In particular, they also state that the staff of both Neuralink and UC Davis “failed to provide dying monkeys with adequate veterinary care” and accused Neuralink of removing video evidence of the experiments, with an UC Davis spokesperson confirming that Neuralink employees had removed such evidence from the university14. They had also confirmed that the partnership with Neuralink had ended in 2020, and stressed that the university had followed the ‘Institutional Animal Care and Use’ policies in place at the university that would ensure that only ethical testing on animals would always occur on its campus. The press release also states that the monkeys exhibited self-harm behaviour, with some of the monkeys being euthanized as a result. Complications with “BioGlue”, a substance used in surgery to help stop bleeding, also resulted in numerous monkey deaths and brain damage as a result15.

In a blog post on its website, Neuralink denies these allegations and strengthens its stance on ethical animal testing and animal welfare16. The post delves into its past with UC Davis, and the testing on animals and cadavers, where they iterate its rationale and explanation for certain events: for example, the missing digits on certain monkeys was the “result of rhesus macaques resolving conflict through aggressive interactions with one another”. They do admit that monkeys had died throughout testing, but strictly deny that they abused the monkeys. The deaths were explained variously: infections in surgical tools, and deaths associated with BioGlue. A key point and one that is re-iterated through the blog post is the fact that Neuralink had not received a single citation or failed inspection from the USDA (US Department of Agriculture) during its tenure at both UC Davis and at their current in-house vivarium. While animal testing will continue, Neuralink is expecting to implement human trials this year17.

The practice of alleged animal abuse raises many concerns and begs to question what kind of precedent will this case be setting for future research practices if Neuralink is allowed to evade calls for transparency? The true fear is that this might become yet another example of Big Tech acting with impunity. Physicians Committee for Responsible Medicine Research Advocacy Coordinator, Jeremy Beckham stated that, “UC Davis may have handed over its publicly-funded facilities to a billionaire, but that doesn’t mean it can evade transparency requirements and violate federal animal welfare laws”18.

So far, 600 pages of medical research documents obtained by the Physicians Committee for Responsible Medicine lawsuit filed to the California Superior Court last May haven’t been enough to prove that the allegations against UC Davis and Neuralink are true. Yet, all is not lost for animal advocacy groups. More evidence may be soon available to corroborate claims of animal abuse. This all depends on the outcome of the Physicians Committee for Responsible Medicine’s latest complaint against UC Davis alleging that the University is withholding videos, photos and ID records. “It is no mystery why Elon Musk and the university want to keep photos and videos of this horrific abuse hidden from the public,” continued Beckham.

So far, Neuralink has denied all claims of animal abuse. However, it’s not reasonable to expect the public to put their trust into the words of a Silicon Valley start-up owned by a billionaire who has a history of playing showman and making grandiose promises only to underdeliver19. Indeed, he is still facing repercussions for his infamous ‘$420’ tweet where he lied to Tesla shareholders about taking the company private. It’s no wonder why the US securities regulator has had to put restrictions on his Twitter account20.

This isn’t to say that brain-machine interface technology shouldn’t be explored. It may bring a variety of benefits to humanity in the future. But the risks associated with the research as well as the implications of the technology may have on human capabilities in the future should also be assessed. Infusing the human brain with technology and going ‘cyborg-style’ sounds like a science-fiction dream to some such as Musk21. However, on the other side of the debate, experts have weighed in on the issue to express caution22. In a sceptical opinion piece Anna Wexler, a professor of medical ethics and health policy at the University of Pennsylvania said, “neuroscience is far from understanding how the mind works, much less having the ability to decode it.” Others like Dr Johnson, Associate professor at the Centre for Bioethics at SUNY Update Medical University have raised concerns over the possibility that the human trials which are said to be going ahead sometime this year, will exploit people with disabilities23. After all, the market for brain-interface technology reaches past people with spinal and brain injuries. She said:

“If the ultimate goal is to use the acquired brain data for other devices, or use these devices for other things — say, to drive cars, to drive Teslas — then there might be a much, much bigger market. But then all those human research subjects — people with genuine needs — are being exploited and used in risky research for someone else’s commercial gain”24.

Moving forward, the public should maintain its scrutiny. Innovative technology always has a magical pull to it, but it should not come at the expense of horrendous animal abuse practices.

I'm a Bachelor of Commerce student in my final year majoring in Finance and Management. My key interests are in public policy, regulation and inequality. As a writer at Cainz, I hope to produce pertinent pieces of work that will help people think critically about the pressing issues of our time.