Overall, the Australian education system follows a similar structure across all states. Notably, it consists of early childhood education followed by 12 years of mandatory primary and secondary education and optional tertiary education. Despite Australia’s education system being known as one of the world’s best, this has become controversial in recent years due to various ongoing issues.

In particular, following COVID-19’s unfavourable influences, Australia’s education sector has undergone constant strain, accompanied by continuous shifts between online and in-person education modes and struggles to support international students following recurrent border restrictions. At a certain point, it is depicted by an article by PWC that due to the impacts of COVID-19, only 3% of Victorian children were attending schools in person, whilst featuring the eminence of proffering options of remote learning. The paper has also uncovered that those students from disadvantaged backgrounds endure significantly higher adverse consequences of online learning. As a result, this further gives prominence to another ongoing subject present in Australia’s education environment: inequality.

As a whole, inequality is delineated as a recurring theme in Australia’s education system. Principally, poverty remains a relevant problem for Australia’s students and education results, as 1 in 6 Australian students is impoverished and fails to have access to necessary support. Furthermore, it was also found that children with families’ wealth being in the bottom 25% are essentially “3 years behind” in education compared to children with families in the top 25%. Hence, this is problematic and accentuates the issues of inequality between students studying within Australia’s education system. In this regard, child poverty plays a critical role in advancing discrimination and bullying cases among children, resulting in inevitable detriment to the victim’s mental health. 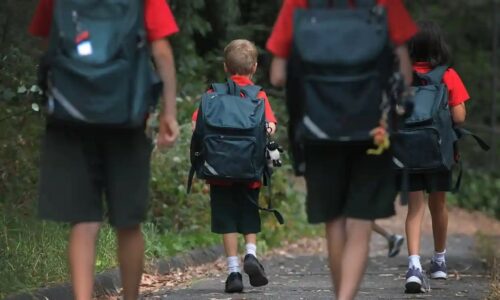 Correspondingly, ongoing issues regarding the Indigenous education sector further stress an education gap. In spite of the various procedures implemented, such as yearly funding by agencies and national initiatives including “Closing the Gap”, there is still conceivably a lack of “rigorous evaluation”. It is suggested that many qualities possessed by students from a disadvantaged or Indigenous background are indeterminable under the traditional education system. Hence, this again reveals the impediments many students may be encountering in Australia’s current education system and the misfortunes which proceed. Recent studies have also demonstrated that Indigenous students face constant barriers when pursuing higher education. Precisely, this is characterised by failures in acknowledging and resolving significant issues, including poverty and suicide rates among the Aboriginal and Torres Strait Islander youth. Concomitantly, the suicide rate among children between the ages of 5 to 17 is five times higher than non-Indigenous youth, thus further indicating a demand for our society and policy-makers to acknowledge inequity within this system and take unabated action.

Debates around public and private schools:

Concurrently, ongoing disputes around private and public schools illustrate a significant discussion area in Australia’s overall education system. Generally, approximately 46% of secondary students are enrolled in a private school in 2019, with a peak in 2018 of 52.7%; there is a public demand for private schools in Australian society. The table below also depicts the growth in the number of independent and Catholic schools and decreases in government schools. Similarly, an article published by The Guardian draws a comparison between the large variety of schools in Australia with other countries around the globe. To be specific, it is divulged that countries such as Finland do not actively offer private school options to parents, thus signifying the “marketplace” nature within Australia’s education system design. Hence, in this regard, a competitive element that may prioritise individual excellence over well-being is accentuated within Australian society to a greater extent. 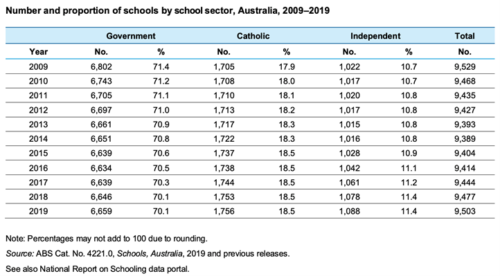 Furthermore, another issue pertaining to inequality is exacerbated when government endowment for independent schools is disseminated to be a lot more than funding received by public schools. Again, this imposes a question of education equality in the Australian education system and the consistency desired in the quality among Australian schools.

In consequence of the various controversies discussed above, apposite recommendations must be addressed. Despite relevant authorities such as the Australian Curriculum, Assessment and Reporting Authority (ACARA) actively disseminating goals including the “Melbourne Declaration on Educational Goals for Young Australians” to assist Indigenous and disadvantaged students, it should be acknowledged that support must be ongoing. Specifically, many underprivileged families or students in remote areas necessitate consistent monetary and non-financial assistance to improve individual well-being and education results. Although many functional arrangements are discussed above, their continuity should be warranted, especially given the additional ongoing adverse impacts of COVID-19.

At the same time, given cases of discrimination, bullying and poverty, incorporating system designs that prioritise students’ mental and physical health is critical in ensuring long term proficient performance. Moreover, Australia’s education system should be reviewed continually to identify overly competitive elements, reduce excessive pressure imposed on Australian students, and prevent adverse education outcomes. Given that aid is provided to students and their families in need, Australia may continue to uphold its title as one of the world’s best countries in supplying high-quality education.

I am a Third Year Commerce student majoring in Accounting and Finance. I am extremely keen to expand my knowledge beyond these disciplines at CAINZ and thus, report on contemporary issues in the current economic climate to make a contribution to society!